Reggie: We never said the Wii storage solution is a hard drive 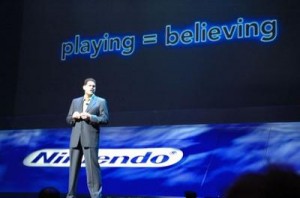 In the latest issue of Club Nintendo – a Latin America Nintendo magazine (thanks, Light Wolf!) – Reggie Fils-Aime and Shigeru Miyamoto shed light on some interesting questions. First, and perhaps most importantly, Fils-Aime reaffirmed Nintendo’s commitment to investigating a storage solution. However, Fils-Aime confirmed that it isn’t necessarily a hard drive. Reggie’s words are roughly translated to the following: “We are working on a storage solution and it is especially important in America because our consumers are using Wii Points for the Virtual Console and WiiWare. I want the people to have the right expectations; We have never said that it will be a hard drive nor have we mentioned how we will fix this issue, but we are going to deliver a better way to store the games.” Miyamoto added that gamers should expect an announcement in the future, as Nintendo is researching different technologies to provide Wii owners with some sort of relief.

Between the two, a few more tidbits were shared. As has been previously reported, a new Zelda is indeed in development for the Wii. Although, Miyamoto noted that the new title has not been shown (will not be shown, rather) until the team is confident in the level of development they are in. So basically, when the game is ready to be unveiled to the public, Nintendo will do so.

Other news includes: Miyamoto said that there are enough peripherals for the Wii so we shouldn’t expect too many more. Fils-Aime commented yet again on hardcore gamers feeling left out of this year’s E3 press conference and explained that there’s GTA for the DS and that Animal Crossing is a hardcore game.

Last but not least: No Wii demos on the Nintendo Channel, no DS redesign until sales slowdown, and Reggie Fils-Aime is flattered more than anything in regards to Microsoft’s recent announcements over Xbox Live avatars. New Pikmin confirmed once again. Miyamoto wouldn’t say whether or not we’ll see another Zelda game on the DS.